Born 1960 in Moscow, lives in Amsterdam and New York

Very few contemporary artists have succeeded in expressing French post-structuralist Roland Barthes’ notion that photographs can freeze a moment and produce a memory as well as Andrei Roiter. In his work, this approach to “freezing” involves a whole process consisting of several steps. First, Roiter photographs utterly banal, random, often significantly worn items, or objects that he puts together himself from waste material such as old boards, moulding and wires, that he shapes from cement, or that he glues together from old paper. These objects he refers to as “props”. He then projects the photographs onto a canvas and creates a final paintings using oil or acrylic paints.

Such an approach gives the painted objects the kind of coldness and distance that we know from the American photo-realist paintings of the 1960s—except that American photo-realism used bright colours and sharpness. Roiter’s subjects, by comparison, are submerged in greyish-black tones, as if lost in a haze in the way objects sometimes fade in and out of memory.

And it is memories that Roiter is interested in. Since leaving his hometown of Moscow in the 1990s, he has lived in constant flux between Western Europe and North America. Travelling has become a permanent state of being. By contrast, home is a fictitious state that stays alive only through the fragmentary memories that appear in his paintings and installations: memories of shacks nailed together with wooden boards that children built as shelters, memories of waiting rooms—because a significant part of travelling is waiting for the next train, the next station—memories of things that once meant something, such as the Constructivist tower by the Russian artist Vladimir Tatlin. But in Roiter’s 2007 work Tatlin’s Chair, even this memory is distorted. It long ago stopped being an expression of cultural identity, even if traces of constructivism can still be found in the way he constructs objects.

The suitcase is a traveller’s constant companion, and so we find it in Roiter’s works—alongside a book and a camera, two mediators of memories. This mediation and its close connection to memories are what fascinated Roiter when he first encountered Miroslav Tichý’s photographs of women. He also donated several of his own works: a camera made of cement, a camera mounted on a wall, and a painted picture of a camera. 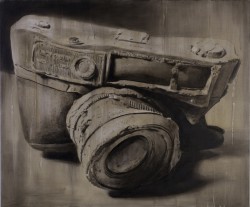