Born 1958 in Zell am Harmersbach, Germany, lives in Düsseldorf

Next to Thomas Struth, Andreas Gursky and Candida Höfer, Thomas Ruff is the member of the Düsseldorf School who most radically exceeds the boundaries of photography. Already as a student of Bernd and Hilla Becher, who are known for their bluntly pragmatic, black-and-white photographs of industrial buildings, he began photographing the living rooms of the German petty bourgeoisie. In the 1980s, he created a series of photos of his friends entitled Porträts (Portraits): austere colour photographs focusing on the face that refrain from any emotional expression. In addition, all defects are digitally removed from the photos. With his series Retuschen (Retouched), based on altered illustrations found by chance in medical books, Ruff started a new phase in his work. He now did not seek out pictures that his camera produced, but aimed more at processing found images.

In 1989, Ruff acquired old photos from an observatory in the Andes that he later re-photographed. For ordinary Europeans, Sterne (Stars) represents a series of nostalgic images of a reality that has disappeared, because it is no longer possible to photograph the night sky in Europe due to air pollution. A fair amount of commotion was produced by Ruff’s series Nudes, digitally processed colour pornographic images that he took from the Internet. By altering the images, he changed these often-raw pictures of crude reality into romantic, dreamy, and almost innocent documents of sexual passion.

Ruff does not limit his alterations to previously existing photos. He is also interested in the possibilities of images that go beyond the methods at his disposal, whether analogue or digital. With the help of instruments developed for night vision during the Gulf War, he has made night images of cities. The result is beautiful abstract images in a rainbow of colours. He moves farthest away from the original photographic process in his series Zycles, images of three-dimensional projections of mathematical curves inspired by drawings found in ancient books on electromagnetism. These completely abstract images made of lines and curves give the illusion of spatial depth, which shows that, unlike traditional photographers, Ruff understands things like a visual seismographer of real events. “I live my life,” Ruff explains. “And occasionally I come across something that intrigues me, upsets me, or amuses me, and that does not leave me alone, and this is the result.” 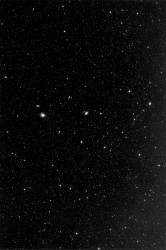 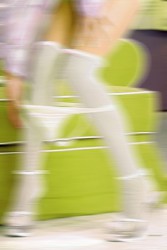 fn 06 from the series Nude 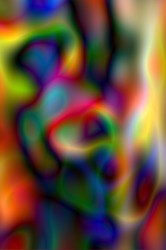