“For me, painting means applying paints to a surface and working with paint in space,” says Adrian Schiess. On the one hand he is influenced by minimalism, an American artistic style from the 1960s that aimed to reduce artistic expression to basic geometric forms; on the other, he draws from the Italian Arte Povera movement from the same era, which emphasized the use of “poor” materials. Schiess has been experimenting with painting for more than 30 years; for him, the decisive factor is color, to which he has developed an almost fatherly relationship: “Colors strike me as labile, peripatetic, without a home, sparkling, fantastic.” It is these forlorn but sparkling colors that he works to get onto the canvas.

Shiess’ pictures are often based on color photographs of nature, except that the motifs are dissolved beyond recognition into abstract fields of color. The only reminders of the original image are romantic titles such as Mondlicht (Moonlight), Roter Mohn (Red Poppy) or Ciel de Printemps (Spring Sky). Schiess works with acrylic and oil paints, but he usually applies them in such a way that there is no trace of the brushstroke. The surface of the paintings is smooth, almost polished. The paintings’ glossy, light-reflecting surface is what makes them so unusual. Schiess even speaks of a “skin” that is capable of behaving like a chameleon. This is also why he does not only hang his paintings on walls; sometimes he simply leans them against the wall, places them on the floor, or arranges them randomly within the room. The deciding factor is that they receive enough daylight, which often evokes an almost blinding interplay of colors. The colors seem to spread throughout the room (this is why Schiess focuses on the relationship between color and space); there is an overwhelming sense of lightness and playfulness, and the viewer is reminded of the airy paintings of the French Impressionists, in particular those of Pierre Bonnard.

Elsewhere, Schiess covers the canvas in thick layers of paint, which he sometimes squeezes directly out of the tube in order to create almost oppressive paintings with a surface like that of a relief. By comparison, in a series from 2009 he soaked several canvases measuring more than 2 x 3 meters in paint, let them dry, and stretched them on wooden frames. These paintings with matt, difficult to define splotches are more reminiscent of dirty snakes than works of art and thus pay homage to the tradition of “poor” art—Arte Povera. 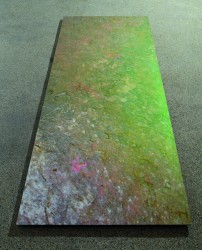