Born 1968 in Cuxhaven, Germany, lives in Los Angeles and Berlin

“Chance in my work is like chance in my life. Everything in my life so far has happened by chance, and most of the time it was good. I let chance happen, and in the same way I let chance happen in my photography. I work with and try to perfect chance.” Chance, as artist Stefanie Schneider describes it in relation to her art and her life, is reflected both in the material as well as the subject matter of her photographic works.

By chance, Schneider happened upon a package of expired Polaroid films that were such a bargain that she bought them even though she didn’t even have the right camera. The film’s chemical deterioration makes itself felt in its faulty development. The Polaroids are smeared, spotted, out of focus, with uneven, often faded, color reproduction. Schneider captures the temporary state of the ongoing development process in enlarged photographs of the Polaroids. The individual photographs and series were taken in the American Southwest, where she had gone after her studies, originally to work as a film editor. In its aesthetics and subject matter, the apparent “patina” on her pictures and scenes of permissive sexuality in the trailer park environment of the periphery is reminiscent of scenes from the hippie communities of the seventies (when Polaroids were ubiquitous). In fact, however, these photographic sequences resembling movie stills and with titles such as Sucking and Brushing or Bells Ringing were made in 2005 and reflect the dull and monotonous American Way of Life in the marginal environments of suburbs and desert and scrub landscapes. That year, Schneider created a series of works based on an affair with a man whom she asked via the internet to spend five weeks with her in the desert of Southern California. The resulting photographic novels Hitchhikers, Sidewinder and René’s Dream document the emotional and sexual development of this encounter, and are accompanied by music and poetic texts on DVD. Schneider allows the coincidences of life to intervene creatively into her artistic work—which, in turn, intervenes creatively in her life. Chance is thus—as in her photo-projects for which she invites friends or actors and lets events run their course—preceded by an arrangement of constellations. Perhaps this is what she means when she talks about wanting to perfect chance. 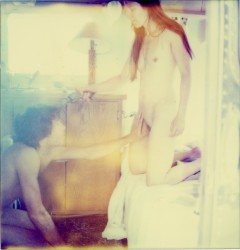 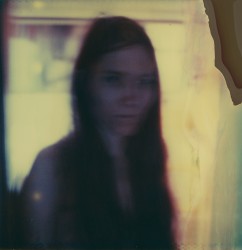