Rosemarie Trockel became known in the early 1980s for her knitting pictures and her industrial cubes fitted with hot plates. Her knitting pictures were made from machine-knitted woollen material stretched onto frames. The machines were operated by men, even though knitting has always been considered a fundamentally female activity. The pictures were patterned with various geometrical motifs or recognizable logos whose semantic sense is apparent—for instance, the Playboy bunny and the hammer-and-sickle. Repeated, and juxtaposed with white spaces, these motifs and logos created abstract and minimalist paintings and objects. By making conceptual pieces and deliberately borrowing from the minimalist idiom, Trockel was boldly commenting on the male-dominated art movements of Conceptualism and Minimalism.

Although Trockel eventually expanded her work to include installations and films, she remained faithful to her original intention—to intelligently and humorously challenge the status and role of women in society. Her drawings, collages, and prints, which she considers equivalent to her sculptures, installations, and films, are important mediums for her subversive messages. In these works on paper, she attacks, through ironically cheerful imagery, the overblown dominance of men in society. In her later works, such as her presentation for the 1999 Venice Biennale, she explored the world of children and adolescents, subject matter which had been largely ignored by artists.

Rosemarie Trockel was the first woman to represent Germany at the Biennale. Alongside artists such as Jenny Holzer, Cindy Sherman, and Barbara Kruger, and her friend and gallerist Monika Spruth, Trockel’s committed and coherent work made room for women in the art world. She managed to maintain her lightness and intellectual playfulness while taking on the serious task of undermining the patriarchal structures of society, and she dared to approach the typically taboo, visceral subjects of childbirth, menstruation, and menopause. Trockel is among those artists who have significantly changed our understanding of contemporary art, and she and her colleagues paved the way for young female artists such as Tracey Emin and Eva Koťátková. 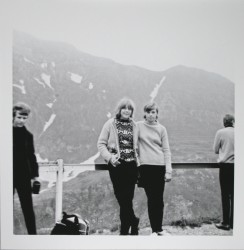